When us Sri Lankans talk about pancakes, we are talking about luscious treacly coconut filled ones.

I remember walking into a house flooding with the warmth of roasting coconut while the subtle hints of spices embrace you like an old comfortable dog who is happy to see you. As you creep towards the kitchen overwhelmed with this sense of euphoria, you are greeted with the sight of mother bustling about pounding spices, rolling crepes, stirring pol pani setting up clouds of steam recreating the magic of a witch’s cove. She shoos you away, expecting you to steal one while it’s still hot and burn your tongue but all you do is watch fascinated as the delicious smells wrap around you like a warm blanket and the bustle reminds you of festive times. Sri Lankan pancakes. Your mother recognizes that faraway look in your eyes and lets you watch on, eventually letting you help. You know that the reward will be generous and you know the reward will be breathtaking.

This be a regular scene in our household on weekend afternoons when I still could not reach the countertops. Now, looming above them and abusing them with bread dough, pasta and cookie dough alike, I feel as if I am following my mother’s footsteps albeit without that same imperial grace. Pancake cooking in the afternoons – this was one of the things that got my little heart racing when I was young. Sri Lankan food was abundant in my household, some of the rarest Sri Lankan food treats that my mother and her mother before her used to make, we had taken for granted – I only realize the true value of it now. Maybe it is the memories, maybe it is the aroma that I associate with the happiness from my childhood, but I still can’t get enough of these absolutely precious local delicacies. Now married and living far away from mother and our wonderfully memory-filled kitchen, I constantly crave for my mother’s cooking. It was just weeks back that I was craving for these so badly that I got mother to make some for me.

It’s strange, I have never tried my hand at these. I’ve recently discovered that I tend to do this with dishes from my childhood that are close to my heart. So I let my mother make these for me. This is my mother’s recipe. I had nothing to do with me.

Fun fact – Have you heard that story about a Gamarala and the wellawahum? Once upon a time this gamarala (Sinhala for a farmer) had these Sri Lankan pancakes from somewhere. He memorized the name of the food (wellawahum) by repeating it to himself along the way with the aim of repeating it back to his wife so that she would make these for him. But when he got home he forgot the name and remembered a nonsensical combination of everything he saw along the way as the name of the food and when he repeated back the name to his wife. Naturally she didn’t know what he was talking about. Then there was this huge row and the wife walked away and a lot of bad things happened and he finally discovered the name of the dish – wellawahum.

Apparently, that wellawahum is the Sri Lankan pol pani pancake!

So what is this food of the gods that has even destroyed families? Let’s find out! 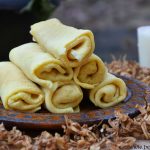 To make the pancake A silky crepe with hints of savory turmeric enrobing an opulent body of rich, dark, silky coconut. The tongue encounters the salty crepe first, tinging it in yellow flavor with the wonderfully herbful turmeric. And then you bite into the juicy sweet coconut and your eyes roll back in sheer pleasure. The subtle hints of perfumed cardamom, the sensual warmth of exotic cinnamon followed by whiplashes of piquant clove each unfurl within the cavernous depths of the caramelized coconut, a peacock taking flight. The treacly profoundness of it is truly magnificent, the spicy notes accentuating the signature kithul flavor of molten caramel and salted butterscotch. The delicate pancake crisp around the edges counteract against the thick, mushy coconut inside, treacle oozing out of the corner of your mouth that you have to wipe it from the tip of your tongue every now and again to stop it from dribbling down your chin.

Served warm, this for me is a warm, cuddly hug. Although dad prefers it cooled. I like it hot ;)

On a cool afternoon as you unwind with a cup of tea, prepare some of these for yourself. You won’t regret the time spent.