Well, this was a small catastrophe and a half.

Casualties – A whole chunk of thumb sliced off by the mandolin resulting in loss of its use for a week, three burnt batches of chips and one batch stuck to the baking pan which entitled hours of soaking it in cold water.

It was the first time I attempted apple chips but I finally have it! THE method. This is the fool proof way in which apple chips can be produced right at home.

Delicious apple chips that you can scatter in your cereal, add to your porridge, bake with it or simply, have as a healthy snack(snack, snack, snack!!). Although called chips, they do not become crunchy, rather a soft, leathery chewy thing that burst with flavour in the mouth with all the character of the apple being saturated in these little morsels of goodness, mingled together with the zesty lime and the sensuous fire of the cinnamon, lifting the body and the nuances of these humble little chips to a whole new dimension. A large jar of these lasts only 2 days in my house although you can keep this up to about a month if you don’t finish it all at one sitting (this has happend).

Although, when choosing apples to make chips, make sure it is an apple that is high in flavour. If the apple is watery and does not have any real flavour, the chips will come out rather bland as well. I’ve learned that Red Delicious and Royal Gala works best so far while the Fuji apple just disappointed me. I am yet to try with other varieties though.

My jar of apple chips is over. Will I be making a new batch? HELL YES! 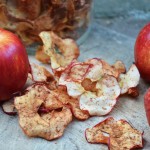