I have never been to China. Not even once. But I have been to a lot of China towns.

The first day I tried Chinese Tea Eggs is etched in my mind so clearly. We were in Bangkok, tired, legs aching from a whole day of shopping and decided to stop for tea and a nibble. It was a tiny roadside shop, barely a hole in the wall. My parents although concerned about the hygiene factor were a tiny bit concerned, but we had no choice since there were no other shops in sight. Now this was Bangkok more than 10 years ago and very different from the Bangkok we know now. While pondering over a menu card that was completely in Thai (and the friendly shopkeeper though eager to help was a bit short on the language factor), I chanced upon the most beautiful thing I have seen ever since I stepped on to Bangkok. It was a basket of small dark globules from which our neighbor was peeling off the skin to reveal a beautifully cobwebbed white globule. I pointed and no sooner than I had, a basket of the same swiftly arrived at our table accompanied by a steaming pot of coffee. At closer inspection I realized they were eggs and was the tiniest bit put off. But as they just sat on the table looking all dressed up, the eggs got the best of me. Having gingerly picked up an egg I cautiously began to peel and oh my! The shell itself was just marvelous, having marbled itself on the inside. I nibbled at it and was pleasantly surprised at the taste. Slightly warm and welcoming, the otherwise bland egg white simply burst forth with savor – a wonderful umami, salt and the aroma of what I suspected was a mix of heady spices hit my senses and before I knew it, I had polished off several of the stuff. Sitting there surrounded by the hustle and bustle of the market all around us sipping pots of hot coffee, nibbling on aromatic tea eggs, it was an otherworldly experience. The night market was stirring. The tents bellowed open as plastic tables and chairs snapped into places and pots bubbled and steam rose carrying with it the heady scent of orchids from the lady selling tropical flora and boiled things. The market took over. The evening rolled in like a velvet carpet tinged with red. There were 3 content people, smug as a cat that had swallowed a canary quite unwilling to leave the place as the wheels of the giant Bangkok nightlife machine whirred into life. Several years later I still think of that lovely evening in Bangkok when I make these little treats for myself. 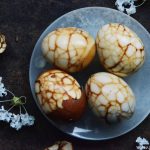 Soft, fragrant eggs – ah my heart! Beautiful marble pattern adorns the eggs lending them flavor and aroma. Now I’ve always been a reluctant egg white eater but this is an egg white that I look forward to eating. The tea lends the eggs a beautiful depth while rendering it earthy while the cinnamon lifts it up with warmth. The star anise is piquant and on the bland canvas of the egg white, robust and energetic. The soy, deep, cavernous and so satiatingly salty combines well with the sweet of the sugar. All in all, an egg that must simply be tried!