Peckish Me is in full holiday overdrive. No excuses.

Ok so, this candy cane cookie recipe is part of our ‘Edible Christmas’ theme this year. It’s a fun recipe (and a yummy one) and you can even hang these cookies on the tree too! A little note on the candy canes. Why are they associated with Christmas?

It is believed that the candy cane was born in Cologne, Germany, when the choirmaster at the Cologne Cathedral who wanted to keep the children quiet during the tradition of Living Crèche asked a candy maker to make some candy sticks. Giving candy to children during worship services was not in practice, so to justify this, he asked the candy maker to add a little crook at the end of each stick to remind the children of the shepherds who came to visit the infant Jesus at his birth. They were originally made in white to teach the children about the sinless life of Jesus Christ. The red stripes were added in during the 1900s and the colour red is said to represent the blood he shed on the cross. The candy canes are made in peppermint flavour and this is said to represent the hyssop plant that was used for purifying in the Bible. The practice of handing out candy canes during plays enacting the Nativity spread through the Europe and thus the candy cane became officially a symbol of Christmastide.

What we are making are cookies that are shaped like candy canes. I mean you can hang some store-bought candy canes on the tree, but where’s the fun in that eh? So we’ll put some elbow grease into it and make candy cane cookies instead! Fun!

Since I’m not such a fan of the peppermint flavor, I am using almond essence in this recipe. You can of course go ahead and use peppermint. If you are a fan of course. 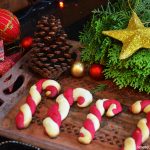 The smell when these cookies are baking – oh heaven :)

First and foremost, they are a feast for the eyes, the white and the red contrasting, creating an irresistible combo, literally good enough to eat. But the thing is, they are so pretty that you don’t want to eat them. They are crunchy, they are soft and melty – these cookies feel…almost fleshy in the mouth. Infused with that signature almond flavor poignant of the season, the sensual vanilla notes peek through the wintry notes, warming you up from within. Sweet and piquant, fragranced with almond and vanilla, hang some of these in your Christmas tree and in addition to prettying up this year’s tree they will also perfume the house with the delicious smell of cookies, almond and vanilla, blended together in an irresistible union. Pin the recipe for later