Evergreen fir trees, the ones we refer to as Christmas trees have a history that runs well beyond the years of the Christ. These trees have been used in winter festivals for thousands of years where the ancients used them to decorate their homes during winter solstice as it served as a reminder of the spring that is to come. Winter solstice in the northern hemisphere is the shortest day and longest night of the year. People believed that sun was a god and that winter came when sun got tired and weak. The Winter solstice was their way of celebrating the time when finally the Sun God would get well and evergreen boughs reminded them of the trees that would return with summer once the Sun God recuperates.

Ancient Egyptians decorated their homes with green palm rushes at solstice symbolizing the triumph of life over death when Sun God Ra would return from illness. Ancient Romans who honored Saturn, the God of Agriculture with a feast called Saturnalia decorated their homes and temples with evergreen boughs knowing that soon their orchards would be green and bountiful. The mystic druids, the priests of the ancient Celts, decorated their temples with evergreen boughs as a symbol of everlasting life. Vikings in their turn, believed that the evergreen was a plant that was blessed by the Sun God Balder.

How the Christmas tree came into Christianity is still a mystery but it is believed that it was the Germans who first brought in these decorated trees into their homes. Those who couldn’t afford a real plant were known to make pyramids with wood and decorate these with paper, candies and apple to make them look like a tree. It is assumed that these wooden trees were meant to be Paradise Trees which were used in medieval German Mystery or Miracle Plays that were enacted on the Christmas Eve in front of churches. In early church calendars of saints, 24th December was Adam and Eve’s day and the Paradise tree was a symbol of the Garden of Eden. These trees were often taken around the village in display, as a means of advertising the play of which the main purpose was to relate bible stories to people who could not read.

Americans were a little more reluctant to embrace the tradition. Although the first record of a Christmas tree being on display was in the 1830s by the German settlers of Pennsylvania, Americans rejected the tree as a pagan symbol as late as the 1840’s.

Would you believe that this pretty, decorated tree was the subject of such controversy? Apparently, it was called “pagan mockery” and a “heathen tradition” and in 1659, the General Court of Massachusetts even enacted a law making any observance of December 25, other than a church service, a penal offence. This means people were fined for doing any sort of decorations for Christmas. However, with the arrival of German and Irish immigrants, this law soon gave way.

But it was in 1846 when Queen Victoria and her German Prince, Albert were sketched around a Christmas tree with all their children that the tree became fashionable, not only among the British, but also East Coast American Society.

So much fuss over a tree! Who would have thought! Oh but then again, we do *whattup Sri Lankan context!*

Ok so where am I going with this? Well I wanted to arrive at these beautiful biscuits that I made recently which could be hung on the Christmas tree! This was inspired by a picture I saw on the net, but could not find the recipe for, so I decided to create my own.

The fun part is really in decorating it and for this I used your regular royal icing, spiked with some almond essence to give it that Christmassy flavor. There’s lots of fun ahead, so stay tuned! 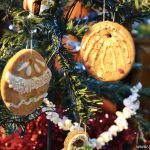 To make the biscuits

To make the royal icing Get the little ones to help out. They will be thrilled to take part in all the preparations ad in playing with the colors and all those pretty little trinkets that you can put on the biscuits. Tiny stars, edible beads, multicolored sprinkles, M&M candies, you name it. Let their imagination run havoc and see what they come up with. You might be surprised.

These crunchy biscuits combine sweet and spicy in a way that is absolutely sublime. Even without the royal icing, they are quite delightful to munch on as you sit and watch the December evenings pass by. And they are a pretty sight to look at too! Hang them on the Christmas tree and watch as the young ones delight at the pretty colors and even better, see how their faces light up as they bite into these lovelies, just snatching them from the tree.  Happiness is found in moments like this. Divide your royal icing and mix in as many colors as you want. Get creative. Really, there are no hard and fast rules.

Keep in mind, royal icing hardens if you keep it out for too long. Use it immediately. The remainder you can put in ziplock bags and store in the fridge for up to 1 week.

You can use any flavor that you want for the royal icing. Almond essence, rose essence, peppermint, you name it. The choice is yours.

These biscuits are delicious by themselves too without the royal icing. It would be a unique thing to do to gift bottle of these to your friends and relations for Christmas instead of conventional Christmas gifts.