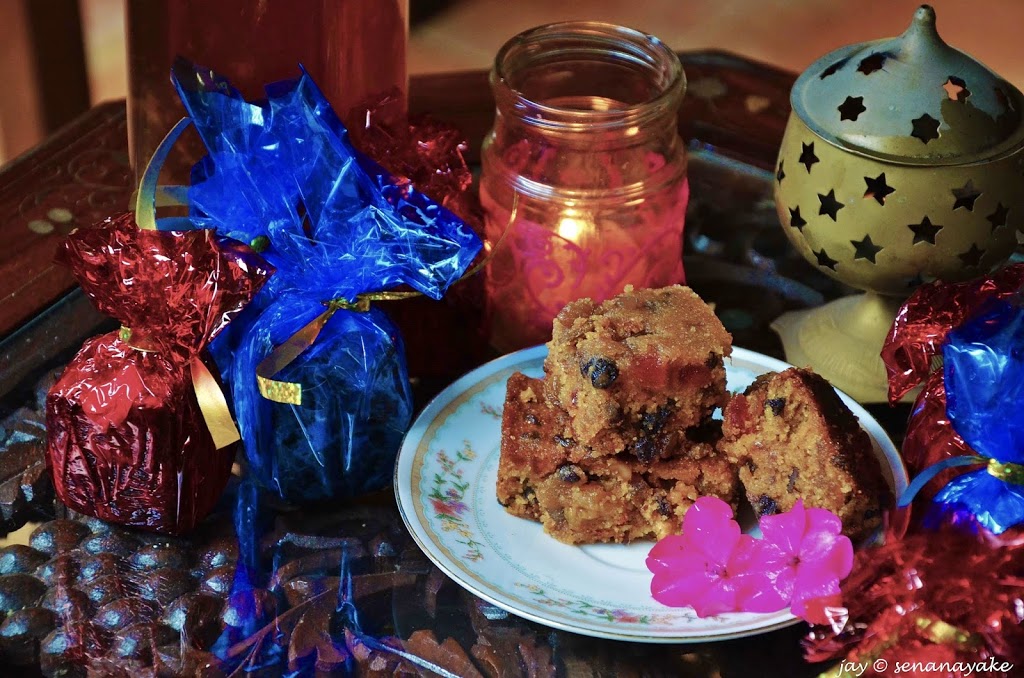 Jayani SenanayakeDecember 27, 2014
BakedCakesChristmasEssentially Sri LankanRecipesSweetTeatime12 Comments
The Sri Lankan Christmas cake. This should have been shared a few weeks back ideally, but fear not, it is not too late still!
So the infamous Sri Lankan Christmas cake. Or the ‘Rich cake’ as we know it. The deceptively simple yet notoriously difficult to get just right. A recipe that requires patience and almost ritual-like dedication. It’s best to start making the cake about 2 months ahead of Christmas as it is a famously known fact that the older the cake gets, the better it tastes. There are a number of recipes that you can find online that may or may not work (most are inconsistent with a number of components missing) but knowing my inability to stick to a recipe to save my life, this particular combination has been tried, tested and perfected over a number of years. For me, this works so I stick to it every time. After the steeping period for the fruits is done, you are ready to bake the cake. After baking, it is best if you can leave the Christmas cake for at least a week before eating it, so that the ingredients can settle, merge and diffuse flavour. So the advise is to bake well before Christmas. This is the very Sri Lankan version of the British Christmas cake which I find to be too dry and well, not too “rich”. Many use arrack and make it essentially Sri Lankan, but I prefer brandy or a fine aged cognac in mine as it gives this unique aroma to the cake that I have grown to love.
Traditionally, all the fruits, including the sultanas, raisins and blackcurrants are chopped into tiny pieces or minced with mincing machines which makes the cake go all mushy. I like a chunkier cake and hence I do not chop the sultanas, raisins and the blackcurrants at all. I quarter the cherries and chop only the dates, the ginger preserve, candied peel. pumpkin preserve and the chow chow into fine pieces simply because biting into a large piece of those would be quite unpleasant and off-putting. The result is a moist, “rich” and chunky cake with a delightful bite!
One immediately senses the almond and the rose in the cake, both on the nose as well as on the tongue. As you bite into it, the slightly grainy texture of the semolina contrasts well with the juiciness of the sultanas and raisins that have grown plump with the steeping, bursting forth with their sweet juices against the teeth. The cherries add that distinct flavour and a stubborn bite to the cake while the spices really come through and counteract against the sweetness of the rest of the cake. The ginger preserve adds a certain piquancy that is very much welcome to the sweetness that is on the verge of being slightly overpowering. The candied peel contributes with its due amount of citrus acidity, adding yet another layer of flavour to this already complex dish, fragrant with the piercing notes of brandy, ever present like a background tune right throughout the experience. Sweet, sweet decadence.
The cake certainly does taste better as it ages and this I can confirm to be no myth. I suppose the fermenting does not stop even after baking. However, store the cakes properly where ants or other animals cannot get to it. Humidity too spoils the cake, so make sure that the place you store the cakes is dry and clean. You can keep the cake for years if I am not mistaken. That is, if you have the kind of eating discipline to make it last that long.
It’s surprising how little sugar you need for the cake though. The ingredients in themselves are sweet enough that extra sugar is considered unnecessary. However, you can always put the almond icing on the cake as well if you prefer, but I just couldn’t be bothered. Why ruin a perfectly alright cake with another layer I thought. It already tastes pretty amazing as it is. Quite a mess to cut and serve though when it is chunky. If I do get the time, I make it a point to individually wrap pieces and keep. Less messier to serve that way, much easier to distribute. Besides, what’s a Christmas cake if it isn’t shared!