The Season Finale of The Game of Thrones Season 7 is just hours away. We are all about dragons, silver queens and fire these days.

It’s interesting how all the major players in the story are now women. At the beginning of the story, the men ruled the plotline, exercising power, flexing their muscles and etc. But now, everything is reversed and we have the ladies driving the chariot while the men folk literally take a back seat.

The Ladies in The Game of Thrones fascinate me. Strong with a mind of their own, stubborn, full of character and persistent, they will work teeth and bone until they get what they want. These are the kind of women that I look up to in real life as well.

Remember my cocktail A Rose for Olenna that I composed for Lady Olenna Tyrell of Highgarden? I wanted to do another one for the woman that everybody is talking about these days – the silver queen, the Mother of Dragons and the Unburnt herself. Daenerys Stormborn of the House Targaryen, the First of Her Name, Queen of the Andals, the Rhoynar and the First Men, Protector of the Realm, Queen of Meereen, Khaleesi of the Great Grass Sea, he Unburnt and the Mother of Dragons – this is what our dragon queen calls herself.  Daenerys entered the show as a young and innocent girl being sold to the Dothraki as Khal Drogo’s wife but there’s been great character development ever since. A kind hearted ruler, compassionate to the suffering of others but a ruthless punisher, an iron lady of sorts whose strongheadedness sometimes leads her to bad decisions. Her only fault as I see is her unwillingness to change her mind when she believes she is right, no matter how harsh the punishment may seem.

Despite all this, the little girl in her still lives. She is girly and is feminine and we get peeks of this every once in a while. She is mighty fond of her dragons and it was a heart rendering moment when she suffered the death of Viserion, one of her most beloved dragons to a White Walker spear. So this dragonfruit cocktail is for her. Sweet with a touch of dragon, this is something that I would imagine her downing when she sits in Dragonstone gazing out to the horizon, contemplating on her next move. 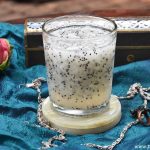 This is a rather chewy cocktail. The coconut milk and the sweet flesh of the dragon fruit flows silky smooth along the tongue while the vodka stings through and through, together with the zing of the lemon, piercing like her violet gaze. Once you are stung, the coconut water soothes and comforts while the thyme note in the simple syrup perfumes with a soft kiss. The drink flows smooth like the silver robes of the Dragon Queen and is silvery in nature, with the piths giving texture, much like her character full of rough edges and an inevitable softness in character that not everyone is allowed to see.

I’ve always imagined dragons to be exotic creatures. Hence the addition of coconut milk to this dragonfruit cocktail.

So how’s about a glass of this in hand when you watch the Season Finale this week? ;)