Sago. We eat it as a pudding, we eat it to remedy the “heat” in our body, we mostly drink it, usually in the morning as it is said to be a “cooling” food. Let’s just say that we Sri Lankans love our sago.

In Ayurveda, there are two kind of food – the heaty and the cooling. While the heaty food have their benefits too, it is the cooling food that are most beneficial (and often recommended by ayurvedic doctors, mothers, grandmothers, fussy aunts and so on) for us tropical islanders, seeing as to how much heat we endure on day to day island life. Sago, whether drunk or eaten, is one of those cooling food. Made from the starch extracted from the sago cycad (which is known to be poisonous and therefore requires special care in extracting starches), sago is consumed in many ways in many Asian countries. The spongy centre of these palms also referred to as the pith, is extracted and ground to powder, out of which the sago pearls are made. However, sago is often confused with tapioca pearls which are extracted from cassava, a root vegetable.

Sago in Asian cuisine is usually cooked in water, milk or coconut milk. Out of this, we Sri Lankans love cooking it in coconut milk, often sweetening it with palm jaggery or sugar. Often other things such as cashew nuts, mung beans and etc are added into this to make it all the more delicious. This recipe that I am posting today is what I have been used to ever since a child which is a household staple.

Personally I believe that the “cooling” effect that sago is believed to have is due to its combination with coconut milk which is known to be a cooling component in itself. Grated finely with the traditional coconut scraper that we call ‘hiramanaya’ and squeezed by hand with water (nowadays we use the blender) until the rich, thick, creamy milk is extracted from the scrapings, Coconut milk is even given to people who have digested poison to flush the toxins out. I know this because I’ve seen a neighbor’s domestic aid being made to drink coconut milk by the jugfuls when she consumed poison due to some boy trouble or something of the sort. (Yes, this is common occurrence in the Sri Lankan society, often among those who have not had a proper education and is a quite a popular move among love struck teenagers to get the attention of either the lover who jilted them or the parents who opposed the relationship. Fortunately, nobody dies. Most of the time).   Personally, the toasty exotic coconut taste that coconut milk imparts any dish appeals to me and hence, I like my sago boiled in thick, creamy coconut milk. 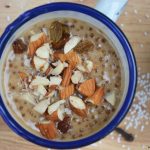 The consistency is semi liquid with sago pearls deliciously rolling around the mouth like little beads. Leave it for a little longer and as it cools, it will solidify and you will have a chewy, jellylike pudding which can be a delightful after meal treat. People believe that sago itself is rather tasteless, but this is not really true. With a pinch of salt and without much embellishment, sago has a flavour that suggests a hint of clean clay and tuber dug out from under the earth with all its secrets and mysteries intact. The coconut milk lends it a sunny burst of toasted coconut flavour with the kithul jaggery  deepening the flavour with its thick, caramely presence, smoky and rich with layers upon layers of deliciousness. The clove pierces through this rich indolence and cools the tongue while the cinnamon spreads its sensuous warmth, warming you from within. Once in a while you encounter a raisin, all plumped up within the sago and once bitten will squirt sweet, sweet juices all upon your taste buds. The nuttiness of the cashews will eventually dissolve into an irresistible creaminess that lends itself to the light creaminess of the sago and you will find yourself grinning, satisfied and with a moustache of treacly substance on your upper lip at the end of it all.

This I believe is one of the easiest dishes to whip up which could also serve as a pudding. And the perfect dish to kill the heat these hot days, just like grandmamma advised ;) You can substitute normal milk for coconut milk. But I assure you it wouldn’t be the same.

Kithul jaggery is the ideal sweetner for this dish. However if you can’t find kithul jaggery, luckily for you Sri Lankan cuisine is full of alternatives. You can try palm jaggery or even maple syrup for this dish. If all else fails, just use brown sugar.

Some people use only cardamom as spices. I like the combination of cinnamon and clove.