Despite its name, nothing else can be more British. The humble Swiss roll, simple and unassuming in making had made its way around the world and presents itself today in many flavors. Sri Lanka too has not been spared. While the traditional recipe calls for raspberry jam or strawberry jam, we Lankans love our Swiss roll in chocolate with chocolate butter cream swirling its way into existence inside. And hence the name, ‘chocolate roll’ was born.

My childhood is in fact, peppered with memories of the Sri Lankan chocolate roll. We Sri Lankans are courteous, gentle and polite and are generally shocked beyond belief at the thought of visiting friends and relations without a ‘gift’. So once a visitor leaves the house, one often spots a brown paper bag on the coffee table in front of the sofa. We the little ones dash forward at lightning speed to see what’s inside. It is customary to bring a chocolate or some sweet to a house if there are children in the house so if there were no chocolates, the next thing that satisfied us was the chocolate roll.

That was before the fancy cafes and cake shops came along. The chocolate roll was the ultimate gift that everybody turned to. There were chocolate rolls for sale in even the smallest boutique shop in villages. That was the golden age of the chocolate roll.

So. This is actually the first time I ever made Swiss roles. I didn’t make the chocolate roll that all of Sri Lanka seem to love but tweaked it slightly to incorporate a delicious vanilla roll and a luscious chocolate ganache instead. Not picture perfect but definitely delish so I thought I will share anyway. I’ve realized since of late that you can learn a lot by observing other people’s mistakes. One person’s mess up can definitely be another’s education.

Every time we head to the supermarket, hubster dearest freezes in front of the refrigerators. And while I try and drag the big kid away, he always manages to slip a chocolate swiss roll into the shopping cart.

Needless to say I’m not too keen on store bought stuff and always insist on making things at home. I’ve promised the hubster that I will make his Swiss rolls at home but never really got around to doing it and I was sick of his constant teasing. So one day, I decided to make it. I made two rolls just in case. And there were incidents.

Incident 1 – Both rolls turned out incredibly beautiful. I rolled the first one in a tea towel and for better measure, tried to unroll it again and re-roll it tighter. And the beautifully, absolutely perfect roll split. Bullocks!

Lesson learnt – Never unroll – reroll. Roll it once and leave it the hell alone.

Incident 2 – I used a luscious ganache filling instead of the traditional jam or the butter icing. In my over-enthusiasm, I cut the rolls before the ganache had time to set in and harden. Et voila the messy, chocolate-smeared vanilla pieces.

The hubster vouches for the taste though. In his words they are the “best chocolate rolls he has ever had”.

When hubster says something of this manner about food, I tend to believe it. 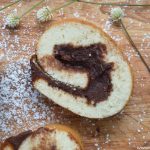 To make the sponge

To make the ganache

Cover with more ganache or simply dust with icing sugar. Refrigerate at least 6 hours before tucking in (unlike me who tucked in too early and spoiled the filling *sob*). Cover with more ganache or simply dust with icing sugar. Refrigerate at least 6 hours before tucking in (unlike me).

I love this play between vanilla and chocolate – fire and ice, the yin and the yang, the good angel and the dark angel. The vanilla infused sponge is soft and yielding while the chocolate inside will entice your mouth with its cool gooey embrace. The vanilla will sooth and seduce while the chocolate will inflame your desires with alarming candor. The vanilla will however, soften the intensity of the chocolate and set your senses on that blissful plain of deliciousness that does not overpower. Simply put, you can eat the entire thing and not feel guilty about it. No wonder the Swiss roll is almost a cultural icon of the country! Don’t monkey around with the sponge. Careful, gentle is the word. And whatever you do, don’t try to reroll once rolled just out of the oven.

Also, roll when warm. If it cools too much the cake tends to lose its elasticity and break.

You can use strawberry and raspberry jam as a filling too. Do feel free to experiment.