It’s there! It’s definitely in the air!

December is my favorite month of the year. The sunshine takes on an extra golden hue and the whole atmosphere takes on a festive glow. This is usually my cue to prance around the house with extra energy, impatient for the season to begin.

It’s also the smell of various types of cooking that gets me excited. It’s a little too early for actual Christmas cooking to take place but I’m going to post up a recipe that is a lovely prelude to all that Christmas flavors hanging in the air, which is also traditionally eaten before Christmas in the United Kingdom.

Parkin is a gingerbread cake that has its origins in the Northern part of England, particularly, Yorkshire. It is traditionally eaten around bonfires on Guy Fawkes Night (November 5th)but is enjoyed right through the winter months which I think is rather becoming as the spicy flavors of the cake is designed to warm the palate. It also goes by the name “Thar cake” and is said that the origins of the cake dates back to the Middle ages,   associated with the pre-Christmas Martinmas fast, and possibly, with pagan bonfire ceremonies that took place at the end of October (later christianised into All Souls).

Oats and molasses are a big part of this sticky, syrupy cake and although wheat flour is used in the modern recipes, the older recipes avoid wheat flour altogether, making it a confection that is made entirely out of oats, producing a sturdier cake. But the fluffier cakes are in vogue now and we like the addition of the wheat flour to make it beautifully crumblier. 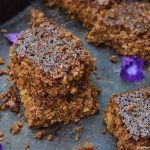 I would store the cake for at least a day before digging in. Parkin has this lovely way of becoming a lovely syrupy sticky when left for a while. Very hard though. Try to keep your fingers away from that cake tin if you can.

The texture is a strange and delightful mixture of crumbly and sticky, with the teeth biting into chewy oats and fudgy molassey goodness. The taste is earthy and deep with an intensity that grounds your taste buds through which then the piercing notes of ginger sings. In this loud orchestra, nutmeg is all but enveloping all that complexity, also taking it up a notch or two in the process. Its beautifully moist and dense and would ideally serve as a dessert piece, topped up with ice cream or some fresh cream.