I just realized that I have never posted anything on salads.

Which is tragic because I love salads! Salads are my go-to meal when I don’t really feel like eating anything else, when I am hungry and need a quick fix or when I am not that hungry but still need to eat something. Well you get the picture. I love salad.

The other day parents were coming over and the grocery day being the day after, there wasn’t much in the fridge either. After rummaging around for a while panicking just a little bit (if people are coming over, they need to be fed! To the throat! Until they can be fed no more!). It was then that I chanced upon the sweetcorn lurking in a corner of a fridge which I had saved up for some sweetcorn soup on a rainy day. That settled it. Sweetcorn salad it will be!

It’s amazing what a lot you can do with so little.  Some more rummaging in the fridge and I stumbled across some peppers – one half of a large red pepper and one small green pepper – left over from a salad of yester days. It was perfect – sweet and mild with piquant and flavoursome. I was sure it was going to rock.

And it did! Served with rice, a fragrant Sri Lankan chicken curry and dried fish (there also was boiled jackfruit and kiri hodi since les parents adore jackfruit, a mallum, a prawn curry and dhal) this was just amazing. I made a large bowl just in case and it was a good thing that I did too because at the end of it all, the salad was being devoured alone, by itself with appreciative hums, nods and grunts around the table.

And the cook couldn’t be happier :) . Saved by the salad! 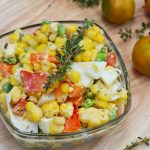 And you are greeted with sunshine speckled with red, green and white! So pretty J

At the first bite, what greets you is the acidity of the lemon and the zest of the thyme. Chow down on the sweetcorn and you will find sweetness flooding your senses with speckles of bitter-sour from the crunchy-fresh peppers – tasting red, green and deep. The part-hard part-mushy corn kernels mash delightfully among the soft and squishy egg while the peppers crunch between the teeth exuding freshness and contrast to the otherwise soft and mild concoction creating contrasts and shocking the taste buds. The egg yolk coats each kernel, each bit of pepper in a soft, downy blanket, subduing the angry sting of the bell peppers and the pepper granules, the fragrance of thyme cutting through the richness of it all. Between the sweet, the sour, the spicy and the tangy you vacillate – you get lost among the sensations – the freshness of it all overwhelming while the rest fills you to a blissful state.

Delicious. Nutritious and oh-so-fresh! So easy to toss up too. And look at all those colours. So pwettyful :)