A clay pot, a sputtering open fire, milk frothing at the mouth of the pot and sizzling as it dribbles down the heated surface, a toasted coconut aroma that makes all those around salivate – cooking Sri Lankan milk rice in itself is a treat.

When speaking of Sri Lankan food, one cannot escape the fascinating tale of the Sri Lankan kiribath.

Kiribath plays such a huge part in the lives of us Sri Lankans that it is the first dish that babies taste when transitioning from breast milk to solid food at the age of just 6 months. Not that they consume plates of it. This is just a symbolic ritual where just a grain of rice is touched to the infant’s lips as a gesture of feeding the baby solid food.

Every April at Sri Lankan New Year, the head of the household (strangely enough, Sri Lanka is a patriarchal society where the father is considered to be the head of the family. Yet this particular ritual is almost always performed by the mother) makes the members of the family stand facing a certain auspicious direction as dictated by the litha and feeds them milk rice, one bite each at the auspicious time. And thus starts the New Year with a bite of the milk rice heralding prosperity and good fortune, followed by the magnificent feasts of Sri Lankan sweets adorning our dining tables.

We Sri Lankans sure do love our kiribath.

Known as “kiribath” (‘kiri’ meaning milk ‘bath’ meaning rice) the Sri Lankan milk rice is basically rice cooked in coconut milk with a hint of sea salt until well cooked and slightly soggy. The rice that is commonly used is a white rice, however in the south of the island, a red rice is used. Raw rice is preferred or ‘kekulu’ rice as opposed to parboiled rice which gives kiribath it’s unique texture. The rice is then poured on to a large, shallow plate, sides and top levelled and cut into diamond shapes and served with a fiery salsa known as ‘lunu miris’ that is made out of dried red chilies, onions, salt and lime. A side of fish ambul thiyal definitely enhances the dish while some also love a bit of seeni sambol to gobble down whole platefuls of the stuff. Some take the sweeter path and consume milk rice with a ripe banana or a piece of jaggery. Me, I like my kiribath with a good splash of the spicy Sri Lankan chicken curry, although that is not a well-known practice.

For us Sri Lankans, milk rice denotes good luck, prosperity and blessings and is an integral part of the Sri Lankan culture. All new beginnings and auspicious occasions are marked with the consumption of milk rice, large bricks of it at that, mixed together with one’s fingers, with lunu miris. The taste is sublime, it is incredibly creamy and rich with the exotic notes of coconut coating the mushy rice, giving it a risotto-like consistency. The squares of kiribath in themselves are rather solid, but break in with fingers and mash it together with the lunu miris before directing it mouth ward for a taste and you will be pleasantly surprised at how well the creaminess of the coconut infused rice and the feisty fierceness of onion, chili and lime goes together. The lunu miris counteracts against the abundant richness of the milk rice, making it a rather unique experience. The sumptuous smoothness of the milk rice fills the mouth with an opulence that is so satisfying that the earth stops spinning, just for a while. The lunu miris aims its spicy kick, but is overwhelmed by the soft cloudiness of the milk rice, calming and lethargic. The world moves at a slower pace after you’ve consumed the kiribath. It makes you so blissfully drowsy that you can happily drift away to a deep sleep or wander around all day with a huge grin plastered across your face. Yes, kiribath has that effect on us Sri Lankans. And it is an effect that we happily embrace.

On New Year at the auspicious time, milk rice is cooked in a newly bought clay pot which lends the kiribath a distinct taste. I have grown to love this taste and especially look forward to it at New Year. It is different from the milk rice that is made in everyday seasoned pots. This particular dish has a refreshing newness that is strangely refreshing and intoxicating. Only one who has experienced this would know what this means. 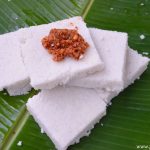 When speaking of lunu miris, I have a funny story.

When my father was stationed outside of Sri Lanka, we happened to attend a Sri Lankan New Year celebration (Aluth Avrudu celebration) at his workplace. Without missing a beat, the Sri Lankans had prepared a table with milk rice, lunu miris and all the traditional Sri Lankan fare that we usually enjoy during the Sri Lankan New Year. A particular European gentleman, a truly jovial and curious fellow came wielding a hefty spoon and saying ‘oooh this looks good’ scoops up a large spoonful of the gleaming red Lunu miris (a tablespoon mind you, not even a teaspoon) and puts the whole thing in his mouth. Either it all happened too  quickly or we were too stunned to move, we could not stop him. Before long the poor gentleman was tearing up, growing a beetroot red in the face and burst into a fit of coughs and started sputtering, his pleas for water barely audible over the coughs and the gasps. After a good many hours he recovered, said that he had seemed to lose sensations in his tongue and never again poked into a Sri Lankan dish without asking what’s in it first.

Lessons learnt – pretty things can be rather deadly.

How to make the lunu miris

Et voila! Your lunumiris is served!

Kiribath and lunu miris, a beloved Sri Lankan staple. And like I so rightly said, we Sri Lankans really do love our kiribath!