The first time for me cooking with an octopus was a complete disaster. This was many years ago.

For starters, it is an intimidating thing to handle. Long, curling tentacles with suction cups that cling to your fingers as you try to clean it is unnerving, not to mention the complete ignorance of what to eat an what not to eat of the octopus. The first time I cooked an octopus, the meat had become tough like rubber and I’ve drained all that beautiful flavor from the octopus by overcooking it. It was an absolute catastrophe.

But I am not one to give up that easily on a quest. Especially when it involves my pride.

When I set my mind to something, it takes an extraordinary amount of effort and unnatural circumstances to get me to stop trying at it until I get it right. It’s the same when it comes to recipes. So, many trials, tribulations, exasperations and revelations later, I finally conquered the octopus. Now can I make octopus meat sing and practically melt in the mouth with flavor. So mighty proud of myself. We islanders do know our seafood by instinct.

First you start with a fresh octopus

How to choose a fresh octopus

The key to choosing fresh octopus is the smell. They should smell of nothing else but the sea. Your nose would spot a octopus that is going bad much earlier than your eyes will.

Contrary to the belief of many, freezing octopus is a sure fire way of tenderizing its meat which is an absolute necessity as the flesh of this creature tends to become extremely tough when cooking. So if you can’t find fresh, don’t hesitate to but the frozen stuff because they will be less of a hassle to cook when you finally get around to it.

How to prepare an octopus

Preparing an octopus is probably the easiest part. You simply have to cut open the head and remove the ink sack and the beach. I also try to peel away the outer skin of the octopus too when possible but as I know, most people wont bother.

Octopus is notorious for being such a tough meat that if you ask five cooks their best way of tenderizing the meat, they will tell you five different things.

A Greek cook will tell you to bash it against some rocks or throw it about the kitchen sink while an Italian cook might cook it with two wine corks. A Spanish cook with dip it three times into boiling water and then cook it in a copper pot. A Japanese will rub it with salt or knead it with grated daikon while also slicing the meat at different angles, with varying strokes. My method – slow cooking/ freeing for 24 hours and then thawing it or rubbing vinegar on it works like a charm. I’ve tried it all!

My favorite octopus recipe however, is this one. This is so amazingly simple with so less ingredients that you simply have to pop it in the oven and let the heat perform its magic. Out will come a wonderfully tender and flavorsome octopus that slices like butter and melts in the mouth. 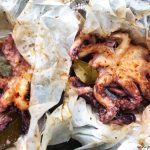 The flesh will cut like a hot knife through butter and will melt on your tongue. This dish tastes purely of the ocean with the oregano and the bay leaves adding just that tiny bit of perfume to the dish. The hero is truly the octopus and your senses will flood with the essence of the ocean with every bite. There’s nothing much to say really, just to dig in.

2. Octopus is one of the meats that are so high in protein but so low in cholesterol. The healthiest protein source out there I’d say!